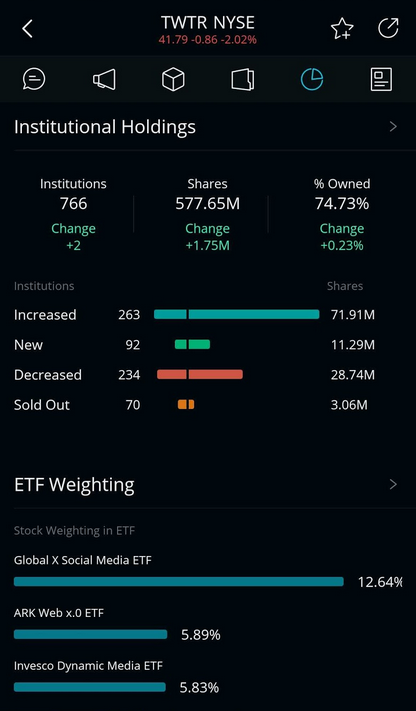 With more and more trading platforms and the growing allure of low-to-no-fee brokerages, new traders are confronted with a deluge of options when it comes to trading and investing. But lost in the promises of sleek interfaces and free shares for signing up is the fact that successful trading takes time, practice and an understanding of resources experienced traders use on a daily basis.

With that in mind, we're going to use this new series of articles to take a look at the charts, ratios and indicators that play an integral role in how traders generate ideas and form convictions on their medium- or short-term trades. To do that, we'll be using the charts and tools available on the Webull stock trading app, which offers traders access to real, commission free trading in addition to a suite of advanced trading analysis and charting.

With another earnings season approaching, traders' minds are gradually beginning to shift back to the thrilling world of SEC filings.

However, beyond top- and bottom-line earnings figures, there is another bit of intrigue playing out in the manila-colored world of the SEC in the form of 13F filings, which reveal how the major investment institutions have adjusted their portfolios in the previous quarter and provide retail traders valuable insight into the institutional holdings of some of the biggest market makers.

As the name suggests, institutional holdings refer to the equity positions of institutional trading operations, which includes everything from major banks and brokerages to mutual funds and insurance companies. Essentially, an institution covers any organization that uses its own capital to trade or have others trade for them.

Because these operations readjust their holdings on a fairly regular basis, and those holdings are generally sizeable, knowing when institutions increase their exposure to a particular stock, industry or sector can provide traders some insight into how the major market movers are positioning themselves.

As an example of how this information is disseminated and how a trader might be able to apply it to his or her own strategy, let's take a look at the institutional holding information on Twitter, Inc.
TWTR 1.49% using the no-fee day trading platform Webull.

Starting from the top, you can see the total amount of institutions that have a position in Twitter, followed by the number of shares in the hands of those institutions and, finally, the percentage of available shares that are in institutional portfolios. Below each of these figures is the overall change in those holdings from the most recent 13f reporting deadline, 45 days of the end of the prior quarter. From the above stock quotes information, it's obvious that institutions are increasingly bullish on the blue bird.

Finally, for those interested in finding diversified investments with a stake in Twitter, the app also lists the ETFs with the largest exposure to the social media company.

Although this summary data can be useful for individuals attempting to for a thesis or strategy around a particular stock, traders can also see how a specific institution or fund has allocated their shares of a stock.

In the case of the Webull research app, traders can view the top additions/decreases for each of the institutions that have a new or existing position in Twitter

Using this information traders can gain a top-down view of the institutional bullishness on any stock they might have an interest in taking a position in, which can help in strategically allocating their own portfolio.

While all of this information constitutes a static data point until the next 13F day, the information could be extremely useful in anticipating how a stock might react if a negative headline causes share price to fall, which may be exacerbated by an outsized institutional player looking to avoid a loss.

On the other hand, an investor might follow a particular fund's performance and try to replicate the success of that portfolio, Warren Buffet's Berkshire Hathaway and David Einhorn's Greenlight Capital each file reports that many investors pour over for information.