A Complete Guide on How to Hire Remote Angular developers | Optymize 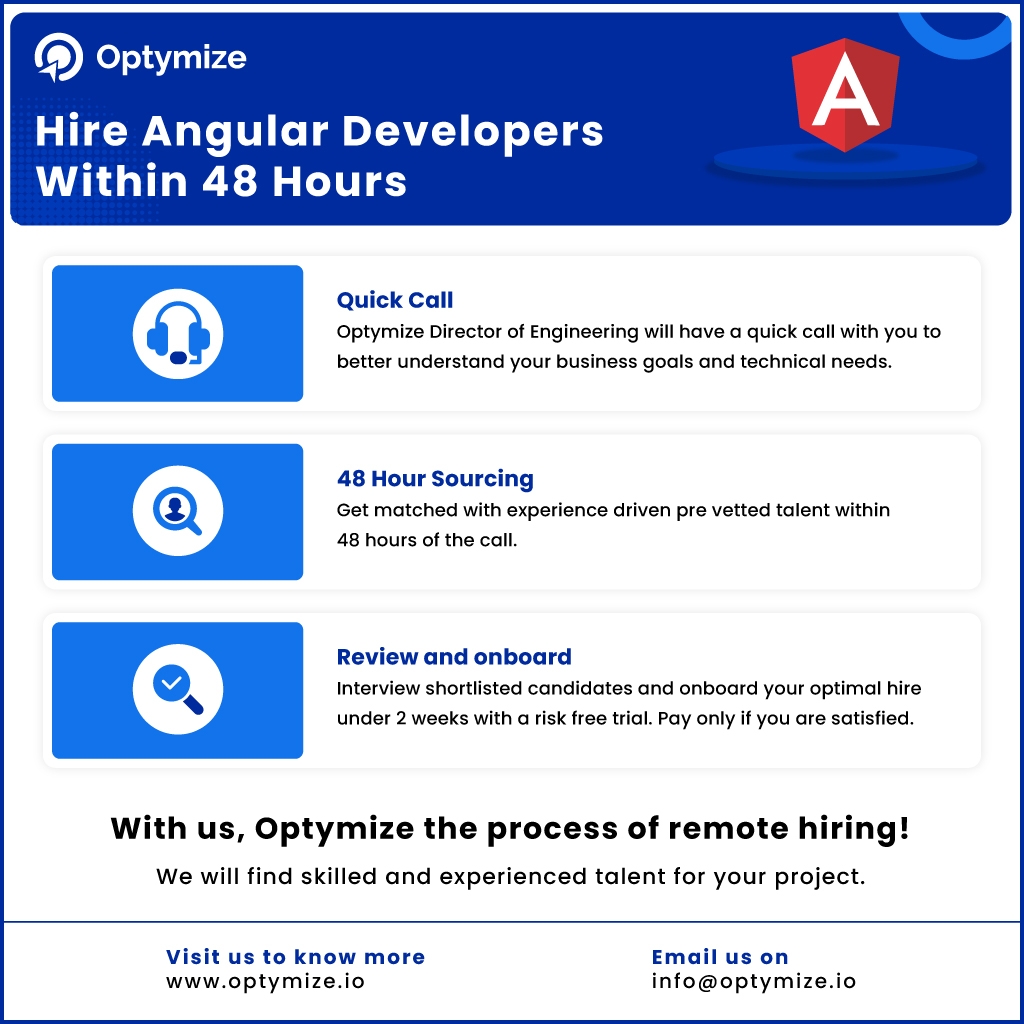 Before hiring remote Angular developers, let us focus on knowing Angular. Angular is now one of the top leaders in many app development solutions due to its flexibility and ease of use. As a well-reputed Google product, this coding framework is attractive to all types of businesses due to its high degree of scalability, ease of testing, and quick and easy learning framework.

The main benefits Angular offers to customers and programmers include declarative templates, hassle-free dependency injection, and end-to-end tools that enable you to create robust web and mobile products. As a result, many clients are looking for an Angular Developer who can start their projects and keep up with the innovations in their business.

Top-Quality Application: It contains various structural components such as pipes, services, injectors which are very good for creating quality applications. Though it will require an experienced Angular developer.

Better Performance: Angular has capabilities such as template syntax, Angular CLI, routers which help in the quick loading of the apps.

Quick Development: An Angular framework is a great tool that allows developers to build Angular web applications faster and more efficiently with the technical benefits of the framework such as detailed documentation, Angular, Two-way data binding, differential loading along large community support.

Readable Code: With modules and components it is easier for developers to read angular code.

Test-Friendly: Because it can divide large chunks of code into smaller bundles it is easier to locate code that is problematic. In a way, it is easier to test and optimize the performance of the apps.

Similar Technologies Related to Angular and their Differences

There is confusion regarding the technology Angular and AngularJS. Many users on the internet use both of these words interchangeably.

Now let us understand both of it and clear the confusion once and all.

The Main Differences Between these Two are Mentioned Below:

Language: AngularJS is based on JavaScript but Angular is based on Typescript, which is a superset of JavaScript that provides benefits such as static code, readability etc.

Directives: Both of these technologies use different architecture; AngularJS uses controllers and Angular uses Components.

Performance: Angular is faster and introduced to address problems of AngularJS.

Even if you’ve successfully narrowed down your project’s front-end framework, it’s important to know what features remote Angular developers must know. Their responsibilities include:

Develop an interactive user interface with consistent performance on mobile and web platforms.
Creates a component lifecycle and allows bidirectional data binding interactions between components.
Configuring guards, resolvers, and event routing paths that allow users to navigate within your application.
Establishes communication between the application and the backend service via the HTTP client and API.
The ability to use message brokers and quality when handling asynchronous programming. Knowledge of running three different tests: unit tests, end-to-end tests, and integration tests.

8 Efficient Ways on How to Hire Remote Angular Developer

To clarify your need for the project, you need to create a comprehensive list of the most important and complementary skills you’re looking for in the remote Angular developers.

With this list, you can quickly eliminate unwanted prospects without wasting time interviewing people who don’t suit you.

Once you get the ideas of ways through which you will be able to hire remote Angular developers, you can further research on all of them and find the best suited approach for your project.
At most, you will have two ways to go: Using the existing HR team or Contacting outsourcing vendors.
However, if you want to hire using your existing HR team, you will have to go through a lengthy process of finding a job-hunting website, then posting a job in it, scheduling interviews for the same. It is recommended that you scan the market first and choose a trusted platform with a relevant resume.

If you want to outsource the hiring process, choose an IT recruiter also called a vendor. Choose the right vendor after a thorough market research, depending on your convenience, the right time zone flexibility, the communication skills of your provider’s employees, and your company’s pricing policy.

To hire remote Angular developers, you must first choose the most relevant resume as per your requirements, contact the candidate, and perform a more detailed screening before hiring.

Using Existing HR Team: To hire remote Angular developers, your HR team has to post the advertisement of the vacant position on the hiring and job search platform of your choice and wait for a candidate’s response. Then search the submitted resumes of all candidates on your own and conduct the first round of interview. This process is longer and can take several months.

Using Vendors: The vendor will deliver a database of remote Angular developers carefully selected by professional recruiters after rigorous screening. The resumes contained therein have already been paced, and pre-screening interviews confirm that the candidate actually exists and is actively looking for a job.

As a result, you will receive a list of remote Angular developers for an interview with you. Depending on the complexity of the job, the first candidate usually arrives within 2-12 weeks.

Interviewing the remote Angular developers who have passed the first recruitment phase is the next step of remote hiring. An online interview is essential to personally know the candidate. This allows employers to review their expertise and test some important hard and soft skills before hiring the remote angular developers.

Using the existing HR team: In the next step, you call all the remote Angular developers and plan interviews according to their suitable time. Such communication can take a long time, especially in the final stages of the hiring process, if there are a large number of remote developers.

The process of conducting an interview is central to all recruitment processes as it helps in determining the candidate’s know-how, confirm their expertise, test their knowledge practically and see how solid their soft and hard skills are.

Technical Skills to look out in a Remote Angular Developer

A complete understanding of Angular, preferably in which version you want to work
HTML and CSS are basic skills to help you find software solutions and tweaks, so you have a good coding experience.
Understanding of Angular’s recommended languages, core JavaScript and TypeScript.
Ability to create complete modules and components and understanding of the web services used in the system
Experience with Node Package Manager (npm) used to install Angular and other web development packages
Understand the Angular command line interface that enables software developers to efficiently program and configure their apps
Contact Reactive Extensions for JavaScript (RxJS), a reactive programming library
Knowledge of using the browser API and REST architecture
Knowledge of Git and GitHub so you can safely try out new features and coding methods
Server-side rendering background
Knowledge of methods such as KISS, DRY, SOLID, etc.
Ability to manage sockets and find solutions to technical problems
Soft skills such as attention to detail, good communication skills, creativity, solution-oriented thinking, and ability to work in teams.

Top Questions you can ask during interview process:

Give an example of a simple HTML document that contains header information and page content?
What is a CSS box model? Can you write a simple code snippet to explain this?
How do I change the style of an HTML element in JavaScript?
How does one implement the lazy loading of modules?
How does one ensure the security of your Angular app?
Can you elaborate on using HTTP interceptors?

Using Vendors: Recruiters will choose the right schedule for you and your candidates. All you have to do is prepare your question and attend an online interview.

Recruiting the best candidates after a series of interviews and rigorous screening tests is the end of the recruiting process. This process includes administrative tasks such as signing contracts, formal registration of new employees with company staff, and preparing all tax and payroll documents.

Using Existing HR Team: Your HR team will have to prepare all paperwork, and software necessary for the remote angular developer to perform operations remotely, and complete formal registration of new employees, including all tax credits and payroll procedures. This approach may incur additional costs.

Using Vendors: If you choose to hire a remote Angular developer using a vendor, the hiring process becomes much easier. The remote Angular developer will actually be an employee of the provider, as the provider will be fully responsible for providing their official employment, salaries, taxes, workstation equipment, and the required software and hardware. As a client, your sole responsibility will be to onboard the candidate, conduct an introduction session with other internal employees to your new team, and provide access to the internal systems needed for the ongoing development process.

Salary of a Remote Angular Developer

The following are the lists of annual salaries in three continents: America, Asia, and Europe.

An Angular developer is always in demand and hiring a remote angular developer can turn out to be a complex process. Finding the correct remote Angular developer for the team requires a clear plan. When you start the hiring process, keep in mind that it’s often a time-consuming and costly multi-step effort. Therefore, if you need a remote Angular developer who is proficient then you should avoid hiring the wrong developer with the right formal qualifications but no soft skills. also, if the process of hiring becomes too complex for you then seek help or choose another approach to hiring.