Although you won’t be taking the little ones trick-or-treating this year, you can still find a colorful, topical, or just plain fun Halloween costume to celebrate from home. And while we’ve written lots about Halloween — including the best costumes for kids — here, we’ve rounded up the best Halloween costumes for babies, as praised by the most enthusiastic reviewers on Amazon.

More than 85 percent of reviewers give this astronaut costume five stars, and many are impressed with how real it looks (even though it is very much sized for babies). “This is was probably the closest to an actual astronaut outfit that I could find, and the patches were stitched on making it look more authentic,” one writes. To make this costume a bit more science-fiction, one reviewer says they made their daughter a jet pack out of water bottles, duct tape, and red and orange felt, “and I will be dressed in a universe print dress to be the universe to her astronaut.” Parents also comment on the fabric, with one describing it as “pretty lightweight, which was perfect for our California Halloweens, but might not be enough if you live somewhere cooler.” Other users say it runs a little big, which meant one parent could combat the cold by putting “a sweater and jeans on underneath [the] costume.” Reviewers are equally as impressed by how this holds up in the washing machine. One notes, “My boy spilled everything he could get his hands on all over the costume and one cycle in the washing machine it looks brand spanking new.”

About one fifth of reviewers reference the quality of this onesie in their reviews. “The fabric is good quality and so is the design,” one writes. “I haven’t washed it yet but this is a Disney product not a knockoff or homemade.” According to someone who did wash it, “The material is soft and the color stays after washing.” A handful of reviewers also describe the fit as “perfect.” “My infant is 20 pounds,” one writes, and says, “The 12 month size [fit] perfectly.” Another writes that this bodysuit is made of, “Quality material and buttons unlike some online child outfits.” Plus, lots of reviewers repurposed this look on their Disney vacations: “We used this for baby’s first trip to Disney and we got so many compliments. He was the only Mike Wazoski there.”

One reviewer “was skeptical because it LOOKED cute online but you really never know … this was PERFECT.” They add that they were particularly impressed by the quality, explaining, “Since the quality is so good it’s thicker than most cheap costumes so it’s great for a chilly night.” Another customer says, “because it was rather chilly on Halloween night, it was perfect for keeping him warm as well.” One even writes, “He wore no clothes underneath just his Pamper, and he was sweating.” Reviewers also appreciate that it comes in four pieces, which makes it easy to put on, though one customer warns that the “feet are cute but can’t be put on over shoes so he just wore brown sneakers outside.” But ultimately, this costume is just adorable: “I recommend this costume because hugging your supercute and very soft monkey infant is lots of fun.”

About a third of five-star reviewers write that they love this costume for their daughter, granddaughter, or other little girl in their life. “My little one was comfortable in it, and she looked like the cutest little monster on the block,” one writes, adding, “The fit of the size 6-12 months was perfect for my 16 pound, 26-inch, 6 month old.” Dozens of other reviewers also describe being pleased with the fit. A few either found it roomy and bought it a little larger so “she could wear warm clothes and layers under the costume.” About 10 percent of reviewers note that the pink fur does shed, but otherwise, it’s just as expected. “What I can say is it is absolutely adorable, very soft, and looks exactly like the picture,” one reviewer writes. 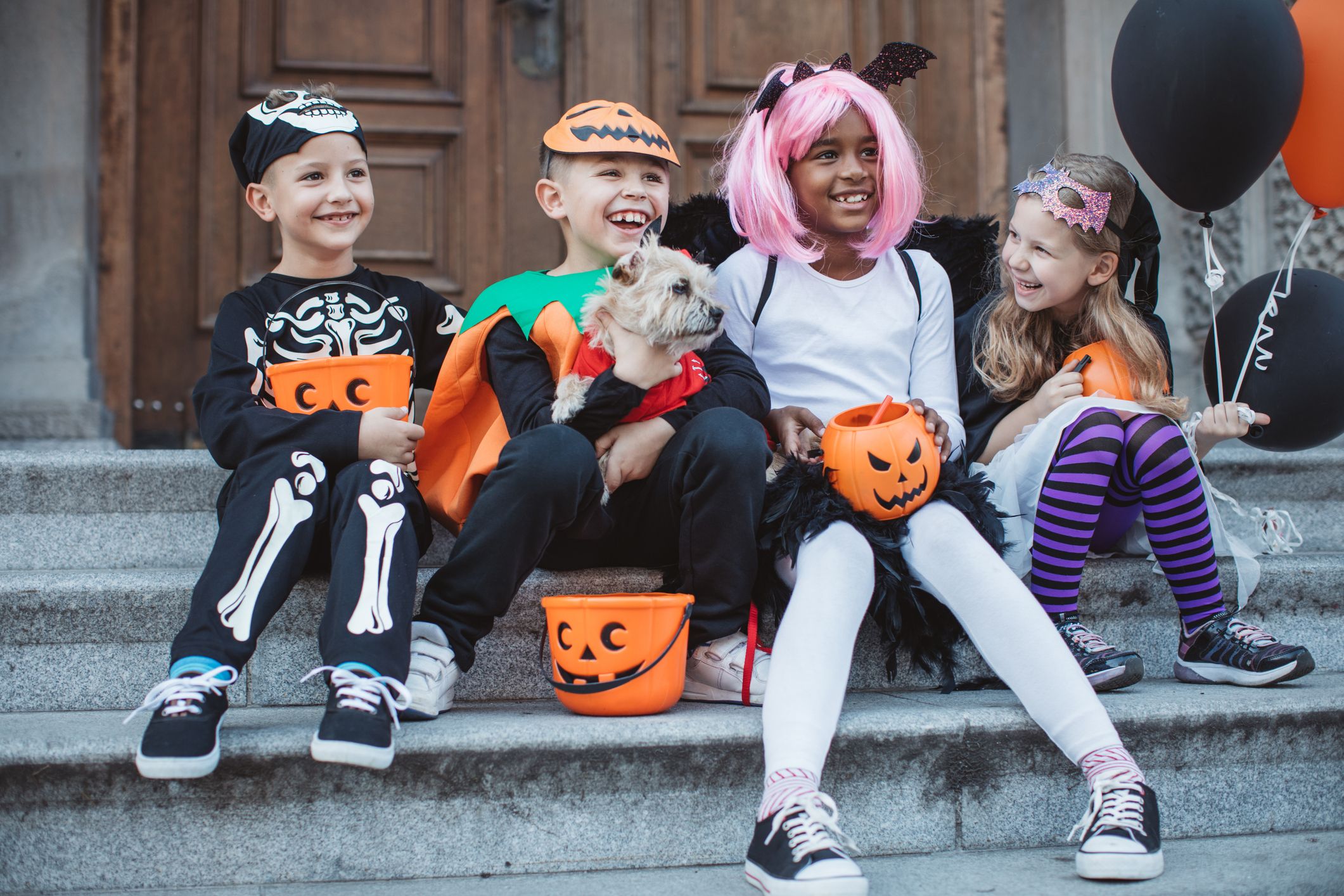 This costume has a lot of different parts, but reviewers say they all stay on, and that their babies seem comfortable. “My son (about 18 months old at the time) didn’t mind having the hat, ears, and beard on, so he must have been pretty comfortable because he doesn’t tolerate clothing and hats that aren’t comfortable,” one writes. Another says, “The little booties with it are adorable and made to stay on, which is great with a 1-year-old.” Many note that the arm holes are small, and that the the fit is slightly off, but as one user points out when ordering, it is best to follow the weight ranges to get the perfect fit. They originally thought it ran big, but say, “Once it arrived I noticed the weight ranges for the different sizes on the package, and based on that I should have ordered the 0-6 month size.”

“My boy was Infant Yoda before Child Yoda was cool,” writes one proud parent of this Star Wars–inspired costume set. Another, who purchased it as a “joke” for their nephew, says they were pleasantly surprised by the “quality materials.” “He didn’t throw a fit having it on, so I can tell it was pretty comfortable,” they assure the other adults. “Highly recommend if you wanna see your child look like Yoda.” Reviewers note that the ears do tend to slouch, but one adds that “it wasn’t a bother, and everyone obviously knew he was Yoda.” 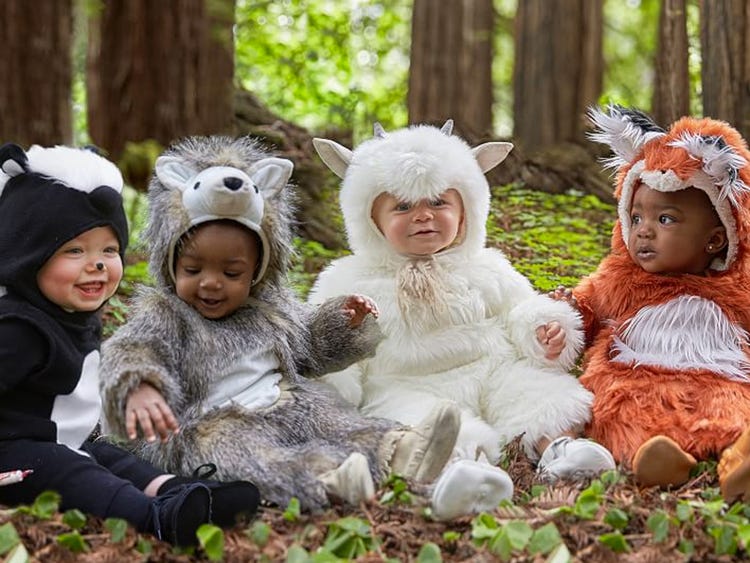 “So get yourself an oversized pot and stick a gallon ice-cream bucket upside down in the bottom with a blanket over it for the kid to sit on,” one reviewer writes. “Order a chef hat and jacket, and your kid will get ALL of the attention at the party. Guaranteed. Be careful, though, because you may invoke the wrath of angry moms who thought their kid would be the cutest at the party. The minute you walk through the door carrying your Lobster in a Pot, everyone will forget about all the little princesses running around and want to take pictures of you and your lobster.” In addition to being a showstopper, this costume is well designed and fits most babies. “I like that it zipped up the back as well as having a snap crotch. I pulled it over his head, but the extra room from the zipper was helpful to get his arms through,” one reviewer writes. “I also like that inside the claws there are actual sleeves.” The feet are detachable, which received mixed reviews, but for kids who are already walking, one reviewer points out, “My little guy could wear his regular shoes for trick-or-treating outside.”

InCharacter What a Hoot Infant/Toddler Costume

“From the first time I saw it, I had to have it for my 16-month-old son,” one reviewer writes, adding that it’s so cute, “A friend of mine 1,500 miles away actually bought the same costume for her little girl.” And though it comes with a lot of different parts, reviewers think the fit is accurate in all sizes. One reviewer who bought two of these costumes, “one for my very big 5 month old, and another for my ‘a bit tall’ 2 year old,” says, “I got the 6 to twelve month and it fits a bit big, which is better than a bit small, in hopes he wears it for something else. And I got the 18 to 24 months for my toddler, I was scared it may be small, but he wears size 24 months for clothes and this fits perfect, it goes down just to his ankles, so for 18-20 months it would fit as well.”

“First off, I did not expect the material to be as good and comfortable as it is,” one reviewer says of this child Elvis costume. “It’s a thick cotton/spandex material, and it fit my chunk like a glove.” And the lightweight material is particularly appreciated by parents in warmer climates. “I was worried about it being itchy and hot, but it will be perfect as the sun sets in Texas on Halloween night,” one writes, while another says, “Living in Florida, we need things that aren’t too hot or too cold.” Though they add that they included some accessories, including “toddler gold aviator sunglasses, fake sideburns (I cut up a fake mustache and attached to sides of sunglasses), and acrylic gemstones (small for shirt, and bigger ones for belt) that I bought from Walmart,” to improve the look.

“I’ve dreamt of having kids and dressing at least one as a mini-marshmallow man for as long as I can remember,” one purchaser writes. “That dream finally came true.” Over 100 reviewers agreed, finding this two-piece Stay Puft Marshmallow Man costume not only cute but “incredibly soft” and “warm.” “We received so many compliments on how cute this costume was on my little one,” another happy parent writes, adding that, like dozens of other reviewers, their infant didn’t mind the hat, either. “She even kept the headpiece on the whole time, and it didn’t irritate her.” (For a complete family look, here’s an adult-size Ghostbusters uniform.)

Parents talk about how much of a hit this vampire is, and one reviewer even says a photo of their son wearing it “made it into our local newspaper.” Reviewers think the cutest part about this is the cape, and one writes, “The collar stayed up on the cape which was a huge plus.” One reviewer took the accessorizing further and says they “also bought a pacifier that was vampire teeth and I had the cutest little one vampire I have ever seen!” One negative reviewer calls out the thin fabric, but another says, “There is enough room to layers something warm underneath for trick-or-treating.” And reviewers in warmer climates actually don’t mind the fabric at all. One says, “Very light fabric for the warm Texas Halloween.”

This child animal bodysuit isn’t technically a Halloween costume, but about 10 percent of reviewers mention dressing up their kids in it for the holiday. “I got this for my son for a Halloween party,” one writes. “I got so many compliments on how cute he looked. It was a little big but I’m glad because it was freezing the day he wore it and the event was outdoors. I was able to layer his clothes to keep him warm.” Another says, “We used this to cosplay our daughter into corduroy the bear for Halloween, but it works as a nice fall coverall for playing in the yard and staying warm.” Like this user suggests, reviewers use this year round. “I am using it the rest of Wisconsin Winter as a ‘coat’ then I know she will stay warm,” one writes, while another says, “I plan on also using this as a winter layer when we leave the house.” They add, “It’s not as thick as I had thought, but I can layer and use a blanket if we go anywhere in extreme cold.”