Cuba on the Verge

or many, Cuba seems like a distant exotic cousin you’ve grown up hearing about but never been able to meet. Whether you’re planning a visit or merely intrigued, Cuba on the Verge is a collection of 12 essays that offer an engrossing glimpse into this island nation and its endless dichotomies.

Carlos Manuel Álvarez writes beautifully about a 2015 visit with his father, a former doctor who had recently emigrated to Miami, and how they worked together shaking coconuts from the trees of wealthy homeowners, collecting 70 cents for each nut.

Wendy Guerra chronicles decades of change in Cuba, from the elegance of the early 1960s to her teenage years in the 1980s, when a ration book allowed her to buy one set of underwear a year and getting an abortion “is much more common than going to the dentist.” She maintains that Cuban women have been empowered in various ways over the years, but laments that “today, female political leadership is still unthinkable.”

Jon Lee Anderson remembers being an American writer in Cuba in the early 1990s, living in a house with no running water, dropping his daughters off at school to sing the Cuban revolutionary national anthem pronouncing “Yanquis [Yankees], the enemies of humanity” as he researched a biography of Che Guevara. Anderson describes returning to their house decades later with one of his daughters, gazing at the nearby spot where they once watched Cuban “rafters”―including their neighbor―plunge into the ocean in an attempt to escape.

Baseball, movies, music, Fidel and Raúl Castro, visits by Obama, the Rolling Stones and Pope Francis―all and more of these subjects are addressed. As author Patricia Engel’s friend Manuel concludes, “Popes and presidents. They come and they see Cuba, then they leave and forget us. But for us, nothing changes. Here we are. Here we will always be . . . the same Cuba, the same ruta, the same struggle always.” 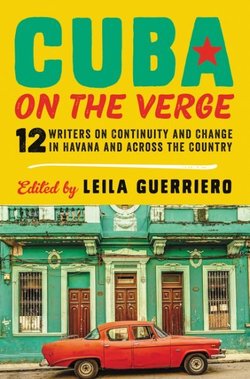 Cuba on the Verge