How playing video games could get you a better job 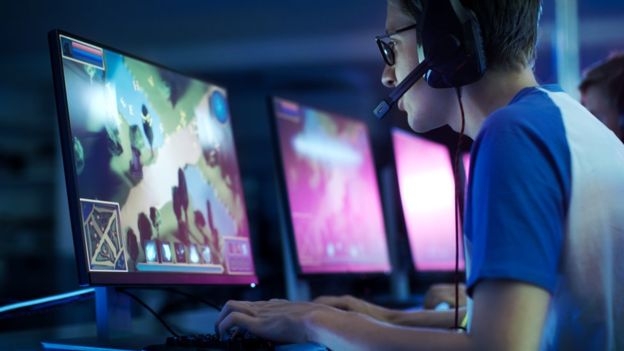 The gaming industry is larger than films and music combined, yet few of us are likely to put our Fortnite playing achievements on our CVs. But why not? Businesses are waking up to the skills gamers can bring to the workplace.

One start-up is convinced that the skills learned playing games - hard-won through years of training and battle - can be applied to real-life work situations.

And Game Academy reckons its belief is backed up by hard data.

Do you enjoy unusual puzzle games like Portal, or tower defence games like Defense Grid? The team has found that IT workers play those more than average.

But if you prefer Civilization, Total War, or X-Com, where strategy and resource management are key, then you might have more in common with managers.

Game Academy's idea is simple: analyse gamers' habits from their online gaming profile, and offer courses in valuable skills that reflect their aptitudes - skills they can practise and refine in-game.

And there is already a growing acceptance that gaming skills are transferable.

Even the military is hiring gamers.

"The ability to assimilate information, react swiftly and co-ordinate actions whilst remaining calm under pressure are often attributes of people that are good at gaming," a Royal Air Force spokesperson tells the BBC.

Those skills are part of what the RAF is looking for "in a variety of roles".

"Skills acquired through gaming can be very relevant to certain areas."

"There are plenty of soft skills that gamers can utilise in a professional setting, such as teamwork, problem solving and strategic planning," says Ryan Gardner, a regional director with Hays recruitment.

But does that really mean your top 100 ranking in Overwatch should go down on your CV?

"It's about how you either make it relevant to the job you are applying for, or how it makes you more interesting as a potential employee," Mr Gardner says.

Gaming also encouraged a competitive streak - and that, he believes, translates.

"When creating treatment plans, the aim is to optimise the radiation dose to the tumour and restrict it as much as possible to healthy surrounding tissue and organs," he says.

It's about "repeating the process, but each time doing something slightly different to improve the result". Not unlike achieving a high score or a perfect run.

"Most videogames are essentially puzzles to solve," he says. "And problem-solving is a big part of my job."

Over at Game Academy, Mr Barrie is aware they still have a mountain to climb.

"The employer community will need the science," he says, but confesses he only became a true believer when he started asking players about their biggest in-game achievements.

"The scale and scope of their answers were staggering," he says. "But ask them the same about their work, and they don't know".

"The engagement and empowerment that people get playing a game - why can't work be like that?" he asks.